Oftentimes I’ve ran into this situation: “Oh we’re just together for the kids.” I’ve seen it in my family, friends, and acquaintances. It’s become so common that I usually don’t even think about it. Strangely enough, I’ve always found it sad even though I don’t have kids and have never been in a similar situation. Expecting a baby has brought this situation to the forefront once again, and this time I can’t ignore it. 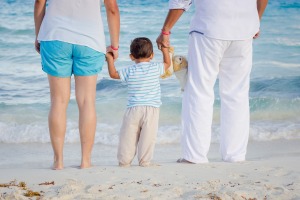 Growing up with your parents together/married is a dream come true. I can say being able to live in just one home has definitely helped shape me into who I am today. You could say that’s why I believe in marriage, got married, and hoped to be married for the rest of my life. God has other plans for my life, and as you know He was like “Nope, not this one Jen.” That doesn’t change my beliefs. I still believe in marriage, I just believe I haven’t met the right guy yet. Or I know the right guy, but the timing isn’t right yet.

But so many people force it. I’ll be the first to admit, marriage isn’t for everyone. There are a few people I know who should just remain single for their sanity and quality of life. Sometimes my pea-sized brain hopes against all hope as my heart consoles me. That guy won’t ever marry you. It’s ok, though, because he’s happy. And when you love someone that’s all you care about, is their happiness. But too often I find the husband or wife who’s married and miserable.

The pain can stem from a number of things, but they all use the same word: stuck. Oh, well I have to wait until Timmy is 18 before I divorce her. You know, the kids want us to stay together. Then when you actually ask Timmy, he wishes his parents would just divorce already. He sees his mom cry daily and his dad is so distant. The only thing he wishes would happen is happiness on both ends, even if it meant not keeping the family together under one roof.

All too often the parents trick themselves into thinking that what they’re doing is for the best. But instead they destroy everything around them. I witnessed the effects firsthand with my ex. Sure, his parents stuck it out together until he was a teenager, thinking it was the right thing to do. Now he chooses happiness first. After years of watching his parents be miserable creatures, he runs at the first sign of anything but happiness. Where his parents faked it for the sake of the kids, he will only lie so long before they catch up with him and he just moves on rather than work things out. He has mastered the surface happiness but will likely never feel anything deep in his life. Sometimes I am left wondering how he even wakes up in the morning.

So do your kids a favor and be happy! Even if that means being selfish. Or if divorce isn’t an option, at least seek counseling. I know some wonderful family counselors in the greater Chicagoland area. Reach out to me if you need some recommendations!